This route is suitable for boat hire days with north, east or northeast wind forecasts. Since in summer the prevailing winds are usually easterly winds, it is a route that can be done most days. It is a different route for those who want quieter coves with fewer boats than the routes to Formentera, which are usually more crowded. It is a route to get to know the most beautiful spots in the south of Ibiza and to see the imposing islet of Es Vedrà up close, a place shrouded in mysticism, the protagonist of thousands of postcards and stories...

Leaving the port of Marina Botafoch, we sail in a southerly direction for approximately 15 or 20 minutes until we reach the point where we will pass to the southern part of the island. This area is known as Los Freus, and is the strait that divides the islands of Formentera and Ibiza. It is a critical point with a lot of traffic and several important dangers to take into account, so it is important that you follow our indications. You should be able to see two lighthouses 20 minutes after leaving the port, one located on the island of Pejats and the other on the island of Espalmador (En Pou lighthouse). We must always pass between these two lighthouses, both on the outward and return legs of our route..

On the way out, once we pass between the two lighthouses we can head towards Salinas beach to reach our first anchorage. Between the port of Ibiza and Los Freus, there is usually a lot of maritime traffic in the summer months and if there is also some wind, the sea can be a little rough. Once we cross Los Freus, the sea will be calm as we will be sheltered from the wind and the swell of the boats.

The first stop is the well-known beach of Ses Salines, so called because of the salt flats behind it, which produce the salt that is so highly prized on the island every year. Also famous are its beach clubs, where you can let yourself be carried away by a cosmopolitan, fun and totally relaxed atmosphere. At the southern end of the beach is the tower of Ses Portes, which used to warn the island of possible pirate invasions.

It will be at this point, south of the beach, where we will anchor, also known as Cala Pluma. It is a wonderful spot with small sandy beaches and stone cliffs. We will anchor at or around the point indicated on the map. The seabed is made of sand and some stones. There is usually no posidonia on these seabeds. We should also be careful in case there is any area with the marine plant and avoid anchoring at this point as it is a protected plant that helps the regeneration of the islands' waters. Anchoring is between 5 and 7 metres deep.

There are two important dangers to avoid, the lower part of Sa Barqueta and El Freu Petit and Escull den Terra, both marked on the map with red signs. This route has no more dangers from now on, so if we avoid these first two and then keep a prudent distance to land of at least 50 metres during navigation, we will have no problems.

After a swim in the salt marshes, the next anchoring point is Cala Jondal. Navigation takes approximately 15 minutes. We will pass by the cliffs of Cabo Falcó and the bay of Es Codolar, so called because of the large round stones that fill the entire beach, called Codols by the inhabitants of the island and within which Ibiza's airport is located.

After the bay of Es Codolar we arrive at the beautiful bay of Cala Jondal, also known for its good restaurants, its "sand" of pebbles and the fun atmosphere that can be enjoyed when the sun begins to set. It is a perfect anchorage point to spend the night because of the wind protection of the high cliffs on the sides. The view from the centre of the bay is fantastic. We can anchor on the right side of the bay, under the cliffs or in front of the beach. The seabed is sandy with a depth of 6 to 8 metres. On the left side of the beach there is a predominance of posidonia. We must always anchor outside the yellow buoys that delimit the bathing area. In addition, there is a special underwater cable marker that connects Ibiza with Formentera, so we must also be careful not to anchor in this area.

Cala Jondal is the perfect place to eat in one of its good restaurants, all of them with inflatable service, and to admire the large yachts and sailing boats that usually anchor here. In the attached map we give you information about the restaurants you can call to make a reservation. Remember to book well in advance as these restaurants are usually fully booked in the summer months.

We continue our route towards Cala D'Hort and its marvellous views of the islands of Es Vedrá and Es Vedranell, its little sister. To do this we raise anchor and leave the bay of Cala Jondal. We can sail past the coves of Porroig and Es Cubells to enjoy and get to know more inaccessible coves on the island of Ibiza. We can even stop for a swim in one of them if we wish. There is another restaurant that we recommend in Es Cubells called Ses Boques. Intimate and with exquisite Ibicencan food specialising in fish and seafood rice dishes. There is also an inflatable boat service.

Once we have passed the aforementioned coves, we continue along the coast and cross impressive cliffs, passing between the coast and the island of Es Vedranell to finally reach Cala D'Hort. We can anchor on the right side of the cove with sandy bottoms between 5 and 8 metres deep. The best thing about this anchorage is undoubtedly the impressive views of the islands of Es Vedrá and Es Vedranell. These islands have for years been the centre of myths and legends in which they have been given almost magical properties of magnetism. According to these legends, Es Vedra is the third most magnetic point on the planet after the poles.

We can enjoy a swim with these views and at the same time it is a good spot for snorkelling and admiring the large amount of marine fauna that inhabits these waters.

The journey from Cala D'Hort to Ibiza takes approximately 45 minutes, so we should plan the return trip with plenty of time. Also, if our idea is to go around the islet of Es Vedrá, we should give ourselves another 30 minutes of margin. Es Vedrá, this grandiose islet rises 382 metres above sea level and gives its name to the natural park to which it belongs. Up close the views are even more spectacular. We can navigate at a prudential distance of 50 metres. The seabed is deep and there are no dangers at this distance. We go around the island admiring its limestone cliffs and caves, and once we are surrounded we set course for Ibiza.

The return is really wonderful, as the sun will give us an amazing play of light with the island of Es Vedra in the background. In the attached pictures you can see one of these moments. 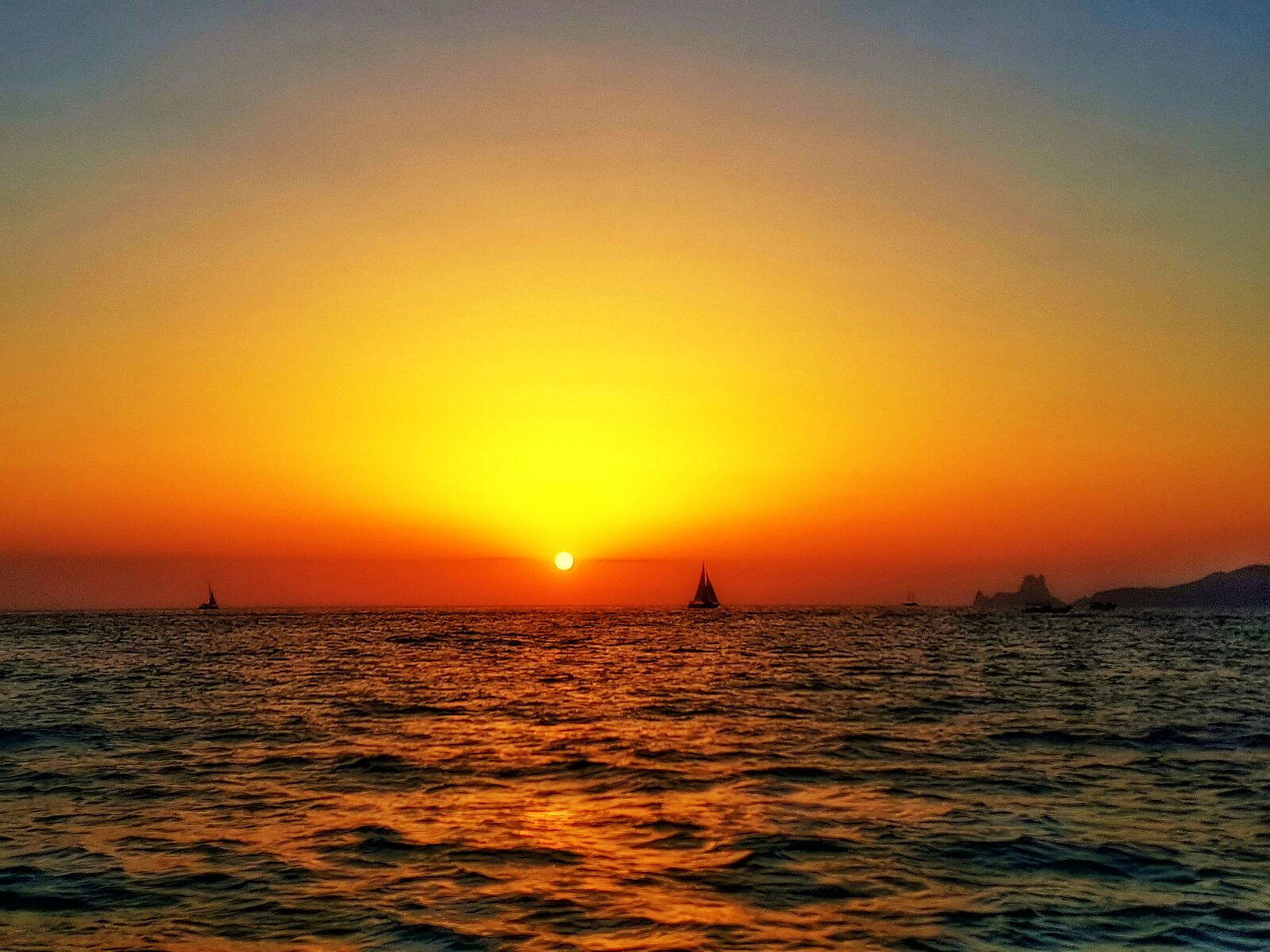 Remember to cross again on the way back between the two lighthouses that we indicated at the beginning of the explanation. On arrival, one of our staff will meet you at the Marina Botafoch petrol station to help you refuel your rental boat. The petrol station usually has a queue between 19h and 20:30h on weekends and every day in July and August. If you arrive at this time be patient and wait in the queue for your turn.

We hope you liked it! If you would like to see more information about the available boats, have a look at our offers by clicking here.